General / The beginning of water management

The beginning of water management

On April 7, 1875, the following written declaration by town councillor Vassily Petrov was placed on the agenda at the meeting of the Narva Town Council: 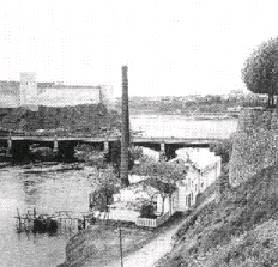 As we all know, water is a necessity nobody can live without, but the inhabitants of Narva suffer from extreme water shortage. Many are forced to carry river water home on their shoulders or borrow a bucketful of water from their neighbour. It is true that there is a person named Hartmann (and another, named Reihard), who carries water to the houses but he hardly satisfies the townspeoples needs. People are often left several days without water, forced to use melted snow or rain water instead and wait until water carrier shows mercy upon them after all the trouble, selling them a barrel of water for 15 to 25 copeck. It has to be mentioned that water carriers demand additional money for liquor and in case you dont tip them, you may spend another couple of days without any water at all. There had been complaints to the police and burgomaster then ordered that a police constabel accompanied the water carriers. There is no reason to punish him. The above-named Hartmann took to drinking lately. He is also known for his bad manners. «It is not my duty to carry you water! Do it yourself or live without!» he says, when townspeople ask for his service. Such unsatisfactory situation reigns in town. And what if Hartmann sticks to his words or something happens to him. It could be a disaster to the town.

After having indicated all these troublesome issues and inconveniences which concern our inhabitants I will present some concrete propositions the Town Council should consider in order to struggle with the water shortage.

The Town Law constitutes that it is the duty of the town council to attend for the well-being of the town which includes among other things the installation of waterworks and taking care of fire-fighting measures according to articles 30 and 31 in fire-safety regulations.

Water supplies have to be established and barrels of water kept in the attics. In accordance to its decisions on April 10, May 25 and June 9, 1874, the Town Council should allow an additional sum in the budget to buy 4 horses which could be given to the fire-fighting squad so that water could be carried to people for 15 copecks a barrel. Such a measure would be a favour to the town and will be met by a general approval.

The above declaration was accompanied by an opinion of the town councillor Lavretsov who argued that financial aid should be granted to the water carriers instead, on the condition that they carry water in case of fire as well. Each proposition received 13 votes and with the outvote of the Mayor it was decided:

To negotiate with the Volunteers Fire-Fighting Squad of Narva for the water carrying in case of fire and supplying the townspeople with water for a certain tax.

Besides, at the Mayors suggestion, it was decided by common consent to make a proposal to the Town Government in view of gathering information about the ways and costs of installing the waterworks in Narva and present it to the Town Council.

The solution suggested by some to supply the town with water by means of a new canal from Kulgu has not been carried out, as the first rate technologist A. G. Malyovanoi proved by plumbing that the market place in front of the Town Hall is 30 feet above water surface at Kulgu. Therefore water can be pumped only from the river Narva near the town.

Estimated costs in the budget:

After having listened the report the Town Council decided to call out for persons who would be interested to supply the town with water and wait for the proposals during the winter of 1875/1876.

During that time a man called Redder started to carry water and because of the competition the townspeople were supplied without trouble. But in the spring of 1875 Redder stopped his services and many were forced to carry water from the river themselves or pay the double price for it to Hartmanns workers. (from the report by V. Petrov, 1875).

A German citizen Heinrich Vilms proposed to install a huge water wheel near the present pump house in the former flour mill (at the wooden bridge near the «Triangel» Bastion) which could pump water to the town. The Town Council decided to postpone the matter until the issue of waterworks would have been solved. Among others, Florion Vitte had been applied for water carrying, requesting stables for horses and a subsidy of 400 roubles per year so that he could supply townspeople with water for 15 copecks a barrel and other town institutions and the house of detention for free. The fire-fighting squad seconded his proposal and therefore the Council decided to start negotiations with Vitte.

On March 29, 1876 it was reported at the meeting of the Council under the item on the agenda “Installing the Waterworks in Narva” that only one proposal was presented during the winter, namely that of Mr. Vilms, which said that Mr. Vilms agreed to supply the town with water on the condition that the pipes would be fitted at the towns expense, that the town would install water tanks and buy his pump house with the flour mill for 13000 roubles, as well as pay 2500 roubles for the annual water supply of 14400 buckets a day or 3400 roubles for 19200 buckets a day. The above proposal was declined by the Council, because the purchase of the flour mill would have been a heavy charge for the town and on the other hand, the fitting of pipes and the installing of water tanks should have been guaranteed by the functioning of the pump house, otherwise the town with its expensive pipes and tanks would be totally dependent on The owner of the flour mill in a year (Mr. Vilms agreed to sign a contract for one year only).

As Mr. Vilms did not accept the Town Councils proposition and there were no other offers then the Town Governments opinion was that in case the Town Council decides positively on the construction of waterworks then the town after fitting the pipes and installing the water tanks the town should make the pump house its property as well.

As to the technical maintenace of the matter then it presented no obstacles, because there were several persons with technical education in Narva Town Government.

A positive note which influenced the constructing of waterworks was the landlords announcement which said that they agreed to buy over 1000000 buckets of water for the households, for a 1/4 copecks a bucket.

On July 29, 1876 the fitting of pipes was started. By the end of September, 1876, the pipes had been fitted to Mäe, Koidu, Suur, Viru, Vahe, Kraavi, Lai, Vaeselapse and Sepa streets, to the market places and in the suburb of Narva up to Rakvere Street, with a branch to the (former) slaughter house.

On September 28, 1876, the water was pumped to the tanks and it was the day the waterworks of Narva started functioning.